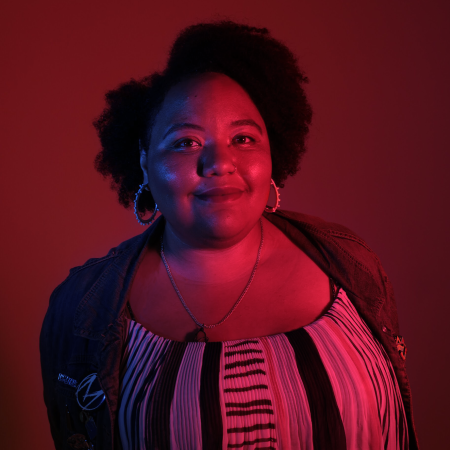 Joelle Monique is an award-winning pop culture critic, executive producer, and host. She is best known for her recaps of HBO’s Watchmen series for The AV Club as a writer. She’s interviewed Keke Palmer for Playboy, the creators of Gotham for The Hollywood Reporter, and Lena Waithe with Melina Matsoukas for the cover of Cultured Magazine. As a host, her work on NPR’s Pop Culture Happy Hour and Fake Doctors, Real Friends with Zach Braff and Donald Faison, has earned her fans across the globe. In 2021, she co-hosted Warner Brothers’ first digital red carpet alongside Kevin Smith for the release of the Justice League: Snyder Cut. Additional appearances include a special look at Black Panther sponsored by Brisk highlighting academy award winner Ruth E. Carter for Collider and a Star Wars special look for Fandango. She’s led panels at San Diego Comic-Con and Toronto International Film Festival. In 2019 she began working as a researcher for iHeart Podcasts. She is now an Executive Producer for Welcome to Our Show, Fake Doctors Real Friends, Red Table Talk, and many more.